Subways for the Downtown Relief Line

The war over Sheppard was barely finished and Andy Byford is already talking about a Down-town Relief line; hoping to take the pressure off the packed Yonge-University-Spadina subway. For years transit leaders have talked creating a line, however other priorities have always taken precedence. With Andy Byford openly talking about the line, maybe we will start to move away from the wrangling over transit. Originally the plan was part of the “Big Move”. The line, initially, would start at Pape station and then move onwards, with a limited amount of stops, to Union station.

At the moment the talk merely hovers around Pape to Union, however there is the potential possibility of sending it north to Eglinton East (through Thorncliffe Park and Flemingdon Park). Doing this could negate the need for a Don Mills LRT, opting for a BRT. There may also be the possibility of sending the line, over-ground through the Don Valley, to the Sheppard line; which would at least give some sense of completion to the line. 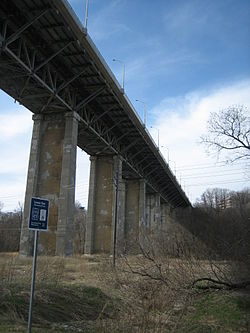 Over-ground is definitely a cheaper option than underground. However a big problem is the Millword (Leaside) bridge. Sending a subway under the bridge would be quite costly. Closing the bridge, for subway construction, would be a traffic nightmare for the area. I imagine, for now, sending the line into the Don Valley area is out of the cards, however you never know what options the TTC may come up with; being that the Don Valley and the option of by-passing Thorncliffe all together or utilizing the open corridors in the area (Hydro, etc…) It will be interesting to see if any happens or if the DRL is ever built. Some will have to be done to move pressure from the Yonge line. I imagine the next civic election will be something to behold in Toronto. With Mayor Ford pushing for subways and both levels of government out of cash, how will these subways be built?

Sheppard: TTC subway to nowhere? Then finish it!